I am often asked – what is the oldest house you’ve ever researched? – and along with some amazing cottages in Somerset, I think back to this extraordinary 15th century Grade I listed home in Devonshire. The Chantry, built c.1490, is situated in the quiet village of Combe Raleigh, but has former links to royal physicians, as well as the family of Lady Jane Grey, and the Duke of Somerset, Lord Protector during the reign of young Edward VI.

Tracing the history of a house back 500 years is always going to have its challenges, but it has been established that a chantry was first founded at Combe Raleigh during the mid 15th century. A chantry was an endowment established for a priest or priests to celebrate specific masses or ‘chants’ for the soul of the founder to ease the founders journey to heaven (paying your way for a shortcut to heaven). It was a little later, in 1498, that a perpetual chantry was established at Combe Raleigh by the lord of the manor, John Bonville (connected to the Grey family and the unfortunate Lady Jane Grey, Queen of England for 9 days) and it was at this time that this house was provided for the chanter priest.

Records reveal that during the 1520s and 30s The Chantry was the home of priest, John Adams, but a few years later everything was about to change. The Chantry survived the Dissolution of the Monasteries by King Henry VIII, but a short time later, in 1547, during the reign of the young King Edward VI, The Chantry Act dissolved the chantries and all their associated practices.

After the dissolution of the chantries, the lands and property attached to The Chantry in Combe Raleigh were granted to someone rather close to the young king – his uncle, Edward Seymour, 1st Duke of Somerset. He was the elder brother of Jane Seymour, the third wife of Henry VIII, and in 1547-49 he served as Lord Protector during King Edward VI’s minority. However, soon afterwards Seymour was granted the property he passed it to Sir Thomas Pomeroy. 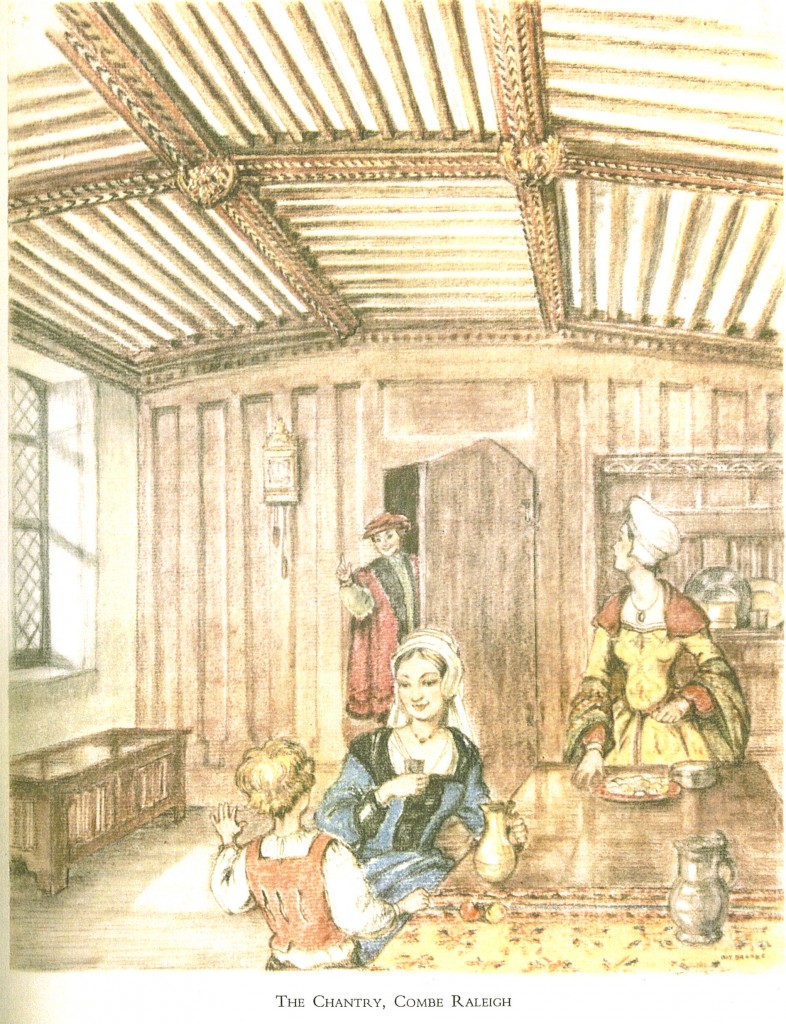 Meanwhile, after the change from a religious house, The Chantry had become a gentleman’s residence. Later in the 16th century it was purchased by John Peter Esq., who, in 1603, sold it to Hugh Crossinge, a merchant of Exeter. But, by the late 17th century it was in the hands of Benedictus Marwood, a grocer of Exeter, whose ancestors had been royal physicians to Queen Elizabeth I, King James I, and also King Charles I.

The property in Combe Raleigh, along with The Chantry, passed through generations of the Marwood family through the 18th century until it was in the hands of James Thomas Benedictus Marwood in the 1780s. A map of ‘The Estates of the parishes of Beer & Seaton, Honiton & Combrawley [sic]…belonging to James Thomas Benedictus Marwood, 1783″ is retained in the Devonshire County Record Office and shows an extensive estate, including The Chantry.

By the late 18th century the occupiers of The Chantry had become local farmers, with tax records revealing it was the home of Joan Saunders who was paying an annual land tax of 12 shillings. Joan continued in the house through to the early 1800s, but by 1806 it was the home of another woman, Susan Sydenham, and by 1808 it was the home of Samuel Dimond.

Later in life James Thomas Benedictus Marwood was recorded as a ‘lunatic’ and after his death (without children) in 1811 his estates passed to his sisters, with Mary Marwood inheriting the Combe Raleigh property. Mary married Reverend George Notley and the estate later passed to their son, James Thomas Benedictus Notley. By this time, in the 1830s, The Chantry was the home of the Pring family, and by the time of the 1841 census it was the home of 30 year old Daniel Pring, an agricultural labourer, along with 70 year old, Mary Pring.

Throughout the 19th century the former priest house was the home of farming and labouring families. The image to the right shows The Chantry during the 1890s by which time it appeared as a rather run-down farmhouse.

In the early 1900s the house was home to the Carnell family, with Richard Carnell and his son Jesse working as bricklayers, along with Richard’s wife, Emma, and their three daughters, all laundresses.

However, the 20th century brought about some significant changes as by the 1930s new owners added a new wing, which included new bathrooms, as well as replacing the thatch with tiles, and it was the beginning of a new life for the house as a comfortable family home.

One of the most significant elements of The Chantry is the survival of so many historic features. With very few changes or renovations made to the house  over the centuries it retains extraordinary historic features, contributing to its status as Grade I listed. This includes a newell staircase, described as a ‘remarkable staircase of heart of oak’, along with a garderobe at the rear and original door frames, timbers, and fireplaces. The hall features intersecting moulded beams with carved bosses, as well as ‘plank and muntin’ screen. The roof has been described as ‘an outstanding survival’ featuring three arch braced trusses along with many other details, including moulded braces and purlins. The house also features a traditional bread oven, and although more recent the 1930s bathroom fittings are also a notable feature.

This sweeping history of The Chantry only gives a glimpse of this extraordinary home and I’m sure there are many more stories to discover by delving into the history of a house that has stood in this quiet village for over 500 years!