If you’ve ever driven into (or out of) London along the A4 in west London, you will have spotted an unusual row of houses as you drive through Barons Court and perhaps have wondered, ‘what on earth are they?’ as you drive by. Well, for years I did, until I had the chance to research the artists studios of Talgarth Road. 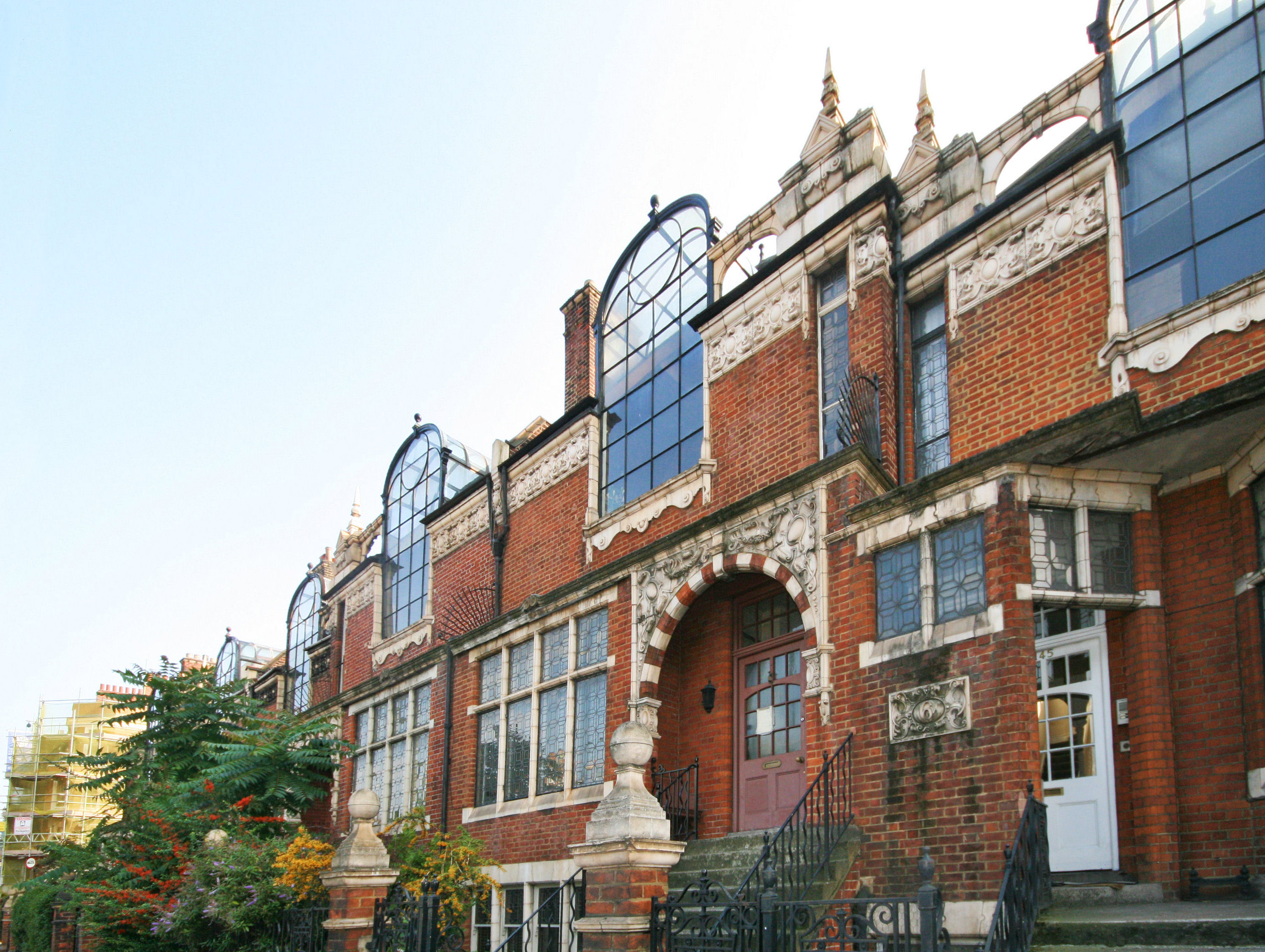 Many of you may have guessed that they were built as artists houses with the large windows along the top floor to allow maximum natural light to flood into the house. The row of eight houses were first known as St Paul’s Studios and completed in 1891 along Colet Gardens – which later became Talgarth Road – looking out over the large grounds of St Paul’s School. The houses were designed by Frederick Wheeler for ‘fine art publisher’, James Fairless, and particularly designed for the ‘bachelor artist’.

They were built in the popular style of the time, with brick and terracotta, along with decorative wrought iron and lead light windows. The basement accommodation was particularly designed for a housekeeper, while the ground floor was the living accommodation for the resident artist and the top floor was completely dedicated to studio space with the large round-headed window.

The first occupant to move in to the studio was Ruby Levick, who at the time was studying as a sculptor at the National Art Training School (later the Royal College of Art) in South Kensington. She later achieved great success, including exhibiting at the Royal Academy, and was much admired by Queen Alexandria. As an aside, Ruby’s brother, George Levick, was the surgeon and zoologist on Scott’s last expedition to Antarctica in 1910.

In 1901-03, No.5 St Paul’s Studios was the home of artist, Inglis Sheldon-Williams, an illustrator and a forerunner of today’s photo-journalist. He worked as an artist in the field during the Boer War and became an official war artist during the First World War.

In 1903 the studio along Talgarth Road became the home of prominent English artist, William Logsdail. He had already exhibited at the Royal Academy at the age of 18 in 1877 and went on to have a highly successful career, with many popular paintings of familiar scenes in London, including St Martin-in-the-Fields and Bank and Royal Exchange. Queen Victoria purchased his work The Antwerp Fish Market after it was exhibited at the Royal Academy in 1880, which is still part of the Royal Collection today. William Logsdail continued at No.5 St Paul’s Studios until 1922 during which time he worked on his portrait painting, including Lord and Lady Halifax and Lord Curzon.

In 1923 through to 1938 the studio was the home of George Kruger Gray, who was particularly noted for his stained glass windows, but also his coin designs for British and Commonwealth nations.

His designs appeared on coins in Australia, New Zealand and Canada, as well as the British shilling, florin, half crown and six pence, between 1927 and 1952.

George Kruger Gray also served with the Artists Rifles during the First World War and was created C.B.E. in 1938.  He had several official commissions, including creating the Great Seal of King George VI and the collar of the Order of the British Empire.

After the Second World War, in 1949-50, No.5 St Paul’s Studios was the home of author and playwright,  Ernest Gébler, husband of the Irish author, Edna O’Brien and father of author, Carlo Gébler. Ernest Gébler wrote several books, including The Voyage of the Mayflower, which sold five million copies and was made into a film with Spencer Tracy. Later, his play Call Me Daddy was made into a television drama and earned him an Academy Award in 1968, and his play Hoffman was made into a film in 1970 with Peter Sellers and Sinead Cusack.

By the 1950s a number of the studios were being converted into business space and No.5 became a dance school for the ‘Margaret Morris Movement’, a unique system of dance and physical education created by dancer Margaret Morris. The house continued to be used as a dance school through to the 1980s, when it once again became a residential home. The new owner, interior designer Allan Day, then set about restoring the house and studio back to its former glory, much as it had been when first completed in 1891.